Your not singing anymore…

Your not singing anymore.

After trailing for most of the match, Peterborough United had scored twice in ten minutes. At one end there was complete silence. At the other, the singing continued till the final whistle and as they streamed out, the Posh fans were buzzing. 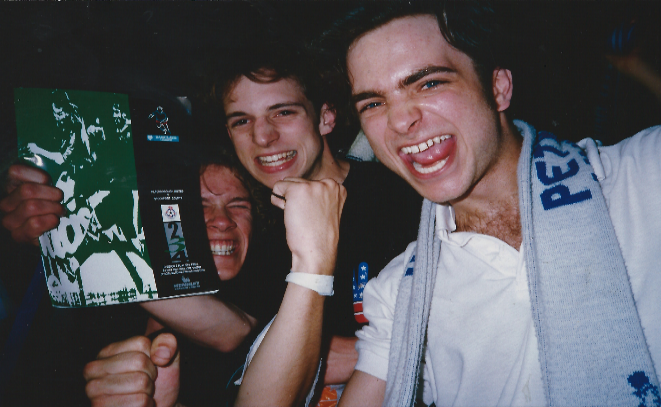 The pubs round the ground were full of City supporters, so Rob and his mates drove to their local. After half an hour, though, four lads wearing Cambridge City shirts came in. Rob couldn’t resist twisting the knife. He started quietly with:

And it’s Pe-ter-borough, (to hear the original scan QR code):

By far the best team

The world has ever seen.

As he got louder, Jon and Stuart joined in:

Oh Boro’ we love you.

They concentrated on their drinking for a bit, then Rob started up with:

Stand up, if you hate City.

Before long the whole pub was rocking, except the lads at the table in the corner. As the evening progressed, bursts of singing broke out, then at ten thirty, Rob, Jon and Stuart left to get a take away. Half a mile round the ring road, Jon, who was driving, saw flashing headlights behind. Then a car pulled alongside.

The occupants were hanging out of the windows, gesturing and swearing. Jon slowed down and speeded up, but couldn’t shake them off. Doing almost ninety, the other car moved closer, so Jon braked hard and their wing mirrors collided with a mighty bang.

“What can I do?” Jon shouted to the others.

So he devised a plan of his own.

“At the next roundabout,” he thought, “I’ll take the turning towards the city centre, then head for the police station near the river.”

The first lights were on red, but Jon didn’t hesitate. He drove across, threaded his way through a line of cars, then turned into the police station. The car behind followed, but nobody got out. Inside, a man at a desk behind a metal grill looked up and said:

This was a good start, but when the chap spotted Rob’s Arthur Scargill teeshirt, his demeanour changed.

“So nobody’s committed a crime then,” he said, on learning of their predicament.

“But we’re in danger from a bunch of maniacs waiting to get us outside,” said Jon.

“Ah, is diddums scared? Well I can’t help you, I’m afraid. You’re gonna have to work it out for yourselves.”

Pointing to the phone on the desk, Rob said:

“If I ring my dad, he’ll come and pick us up. I’ll get him to park down a side street, then you could let us out the back way.”

“And what if a member of the public wants to report a crime while you’re blocking the line?

They couldn’t believe it.

“So there’s a problem, isn’t there? But it’s your problem, not mine.”

Now the boys were fuming.

“Your name and number, please,” said Rob, “and I wish to speak to your superior officer.”

“He’s busy at the moment and I don’t have a number ’cause I’m not a policeman.  My name’s Dave.  Now it’s time to go, you’re clogging up reception.”

They sat down on the bench by the door and decided to wait. Eventually, they hoped, the Cambridge yobs would get bored.

It took the yobs till midnight before they’d had enough. But when the car’d gone, the boys were still wary. So they hung on another forty minutes.

“Off you go boys. Mummy and Daddy are waiting,” was Dave’s parting shot, as they left the building.

When he got home, after one o’clock, Rob’s parents were in a state. Happy he was safe, but furious he’d given them such a fright. Since he’d turned seventeen, the rule was that he could stay out as long as he liked, provided he told them the time he was going to be in by, and stuck to it. Not a minute later. On this occasion he’d said he’d be home by midnight.

Next morning, Rob was still seething. His dad pointed out it’d just been one unhelpful individual, but Rob didn’t accept that. As far as he was concerned, the whole force was guilty.

“Help the police?” he said. “They can stuff that right up their arses. I am never, ever, going to help them again.”

“Without the support of the public,” said his dad, “the police can’t do their job. They rely on us as much as we rely on them.”

“Well they should’ve thought of that before refusing us a phone call. They were out of order, Dad.”

“OK Rob, but what are you going to do about it? You could just fume, or you could try and put things right.”

“Write a letter of complaint, setting out your grievances.”

It took them a while to produce a draft. Far from finding sanctuary, they explained, Rob and his friends had received treatment that was rude, hard-hearted and lacking in any notion of public service. Rob wanted to use expletives to drive the points home, but his dad talked him out of it. The letter, which they copied to their local MP, would carry more weight without them, he said.

Two days later there was knock on the door at teatime. It was the Assistant Chief Constable of Cambridgeshire who’d come, in full uniform, to apologise. Over a cup of tea, she told the family that Dave, who was a civilian, would be re-trained.  She did her best to win back Rob’s trust and when she left, Rob’s dad pointed this out.

“Oh, come on, getting the second highest officer is pretty good. They probably thought you’d be won over by a woman’s charms. Anyway, are you going to give them a second chance? You’ll be a happier bunny without a chip on your shoulder.”

Next day, a letter arrived from the House of Commons and Rob was grudgingly appreciative of Dr Brian Mawhinney’s response, but still reluctant to forgive the police. He told his dad he would test the Assistant Chief Constable’s assurances by holding the police to the highest possible standards of behaviour. One more slip up and he’d hate them forever.

Peterborough’s next match was away to Millwall, where the police regularly used horses to corral the crowd, and charged at fans with batons raised. Passing Rob’s test would take a miracle.